Skip to content
Connect with Us:
Home » International Activities » Rwanda
Posted on February 11, 2017February 15, 2017 by

Dear Kris Karlsen and Everyone at The S.T.A.B.L.E. Program:

In March 2008, I was a member of a medical education delegation to Rwanda. Once I returned home, I kept feeling as if there were more I could do there. The country and its people continued to haunt me, and I eventually felt led to start a 501c3 organization to continue working with some of the people and projects that I had visited. In March 2009, I became a Lead S.T.A.B.L.E. instructor so that I could bring this program to the medical community in Rwanda. My first class was in October 2009 and I had 22 students made up of residents, nurse midwives, ER nurses, ICU nurses, L&D nurses, and NICU nurses.

Being the typical naive American abroad, I went with the expectation that this S.T.A.B.L.E. class would be similar to those I had taught in the U.S.-after all, they had a neonatal intensive care unit and took care of ventilated babies! What a surprise and treat I was in for during that class. These students were totally engaged in the class and I soon realized that much of the information was new to them. I discovered that many nurses in Rwanda have only a high school equivalent education and their training is literally “on the job.” During the temperature module, the nurse midwives asked how they might keep babies warm out in the rural areas where there are no radiant warmers or isolettes. Recognizing these limitations, we discussed how to do Kangaroo mother care and thus added this important information to the Temperature module. The rest of the class was spent with me coming up with “alternate” ideas for those rural situations – I was teaching at a regional hospital, very different from the situations most Rwandan mothers found themselves in!

The “treat” for me was in realizing that, as Americans from a very developed country, we have to volunteer not only our services, but also our acceptance of what is. Making change is not easy in places where things we in America have come to take for granted. Maternal and infant mortality is not just a statistic, but an unfortunate reality of life. Water that someone has walked three miles one way to haul back is most often used for drinking, not for hand washing. What a challenge, but also one of the most rewarding experiences I have had in 29 years as a nurse. I am returning to Rwanda in July 2010 to teach S.T.A.B.L.E. again as well as to do some teaching at a hospital on the border of the Democratic Republic of the Congo. My goal is to return twice a year, each time a little more knowledgeable and better prepared to adapt my teaching. My hope is that other colleagues will choose to make the trip with me! 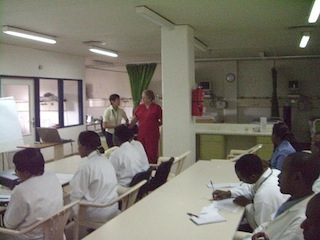 Seeking assistance with an explanation from Alice Cannon, Team Leader (Educator) in the NICU at King Faisal Hospital, Kigali. 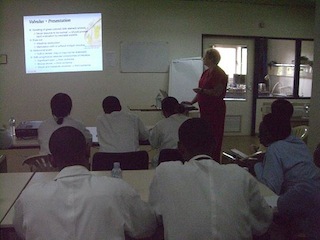 Neonatal emergencies such as volvulus were of particular interest to these students. 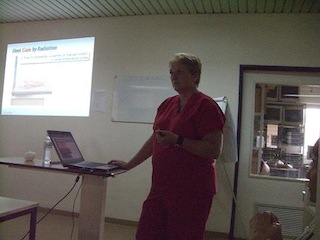 Calling upon my critical thinking skills to adapt S.T.A.B.L.E. principles to Rwandan capabilities.